Hard work and family are words that best sum up the life and times of Tim Misny.

Tim’s humble beginnings originated in Euclid, Ohio. He was born on April 22, 1955 to Andy and Rose Marie 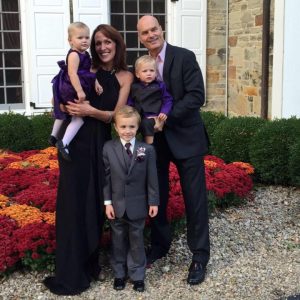 Misny. He grew up in a one-bedroom brick bungalow and attended St. Paul’s Elementary School.

At the age of 12 Tim landed his first job at Green Ridge Golf Course in Wickliffe, Ohio, cleaning locker rooms and bathrooms for 50 cents an hour. He saved his earnings so that he could afford to pay his own tuition at St. Joseph High School in Cleveland, Ohio.

While at St. Joe’s, Tim was a class officer, editor of the class newspaper, and was recognized as a national merit scholar. He graduated in 1973.

Additionally, in 1973, two major events happened that shaped his life.

Tim enrolled at John Carroll University. His Jesuit training instilled the intellectual discipline that would soon become the bedrock of his legal career. He graduated 1977 with a 3.9 GPA as a Pre-Law Political Science major.

While a full-time student at John Carroll, Tim worked full time as a reporter for the Sun Newspapers, which at the time was the nation’s largest weekly chain of local reporting. He covered a wide range of subjects from political, to sports, and everything in between.

This experience taught Tim the invaluable lessons of being able to ask the right questions and tell a story in a compelling and informative format.

Truth be told, Tim’s inspiration to become a personal injury lawyer came to him when he was eight years old.

Tim’s maternal grandfather, Joseph Vulich, was an immigrant bricklayer from Croatia. He came to Cleveland to make a better life for his family, and found work as a bricklayer during the construction of Tower City Center.

Tragically, one day the scaffolding that his grandfather was working on collapsed and he fell to his death. His wife, and Tim’s grandmother Veronica, who could not read or write a word of English, was left alone with three young children. Tim’s grandmother took in laundry during the day and cleaned offices at night while single-handedly raising three wonderful children.

One day when Tim was eight years old, Grandma Vulich and Tim made a pilgrimage to Tower City Center which entailed taking three different buses from their home in Euclid.

Upon walking into the Tower City concourse, grandmother took Tim’s hand and pointed up to the magnificent gold-plated ceiling and exclaimed, “Timo, your grandfather helped build this place!”

The young boy said, “Who lives here grandmother?” and Veronica replied, “Sweetheart no one lives here, lawyers have offices here and someday, if you work real hard, you too will have an office here because there will always be people that need you.” As an eight year old, his response was not so profound: “okay, can I have my roasted cashews now?”

Throughout Tim’s childhood he constantly heard stories about the consequences of a tragic wrongful death and how it has a powerful impact on a family for generations.

As a result of that inspiration Tim has dedicated every fiber of his being to represent families that have been devastated by an act of negligence.

The inspiration and motivation that was instilled by his grandmother at a very early age in is that there will “always be someone that needs you” drives him every single day.

Tim has come to learn that in many cases, his experience, hard work, and substantial financial resources oftentimes makes the difference in whether an injured family receives no compensation or the type of financial compensation that will allow the victim and their family to resume as normal of a life as possible.

Of equal importance to holding accountable those who expose us to unnecessary harm and danger, Tim’s work actually changes the way medical professionals conduct themselves. In a super numerary number of cases, the claims that Tim has brought against hospitals and medical professionals has caused them to change the way they practice and in essence, make it safer so that the tragedy that befell Tim’s clients would never happen again.

At the cornerstone of Tim’s practice is communication. Each and every one of Tim’s clients receive his direct dial cell phone number because his client’s concerns and questions do not conveniently fall within the 9 a.m. to 5 p.m., Monday through Friday, confines.

The thought of bringing a claim for a wrongful death or catastrophic injury against major institutions such as the Cleveland Clinic, University Hospitals, and/or Metro Hospital—to name a few—can be daunting. Those trepidations are relieved when Tim shoulders the burden.

From that point on, all that the client needs to worry about is getting well. Tim will call upon his 38 years of representing the victim in major injury claims to navigate through the labyrinth of the legal process.

Tim cannot turn back the hands of time to prevent the tragedy that has befallen a family, but he can, however, provide comfort in knowing that the appropriate parties will be held accountable. Moreover, the family will receive significant compensation to cover a myriad of ongoing concerns such as lost wages, future medical bills, and pain and suffering.

Recently, Tim successfully resolved a medical malpractice claim in mediation for a four year old boy for, in excess, $5 million. The young boy’s father told Tim that he was impressed with the passion that he had demonstrated throughout. Tim’s response was that he fights for every child in a birth injury and/or medical malpractice claim as if he’s fighting for his own child.

Tim and his wife Stephanie are blessed with their son Max, age 7, and twins Gus and Ruby, age 3.

With 20 offices throughout the state, Tim regularly visits clients at his office, hospitals, work places, restaurants, and at their homes.If you or a loved one were made a victim, Tim would be happy to meet with you at a time and place that is most convenient. If you have a question regarding your case, you may submit it here or contact the office for a free consultation at 1-800-55-MISNY.