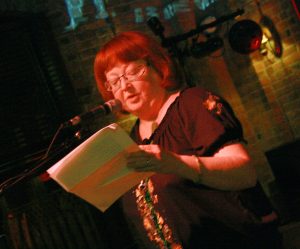 my Cleveland, I don’t mind him
being a blue collar, few dollar man
don’t need him all prettified,
gentrified, riverwalked,
starched, pressed and lean

I like his urban sprawl
his sports bars,
sports cars,
Ford trucks,
Great Lakes brew
and bratwurst,
his rib fests and bare chests
he can put on a suit and tie
if the occasion calls for it
he cleans up real nice
he’s no “playhouse square”
he’s a comfortable fit

I like his long hair, level stare,
acting like he doesn’t care,
blue jean and boots swagger,
his never-say-die attitude,
his rock and roll hammer
I dig
the punk, pensive, ponytailed
poet in him

I like it when he shows his
ethnic roots
and I don’t mind his often gruff speech,
his questionable grammar
don’t mind his broken english,
city slang
or down-home twang,
his sometimes breach
of political tact
and cultural fact
we have an understanding

don’t mind his tough sidewalks,
his callused highways,
the clumsy fumble of his
tumbledown neighborhoods
don’t mind the times his rough
streetlighting catches at my clothes
in the heavy dark
when he’s running his transit
through my hair

at least, he’s reaching out for me,
wants to feel me close against him
I don’t mind the stubble
on his troubled streetcorners,
cold Lake Erie steaming his breath,
his bleary neon eyes,
his wasted wallpaper billboards
too many nights of revel
after long days spent
in steelwork,
car shops,
west side markets
and east side offices,
orange-barreled highway construction,
Clinic halls
and University malls
working,
giving all he’s got,
just making a living
I trust him; I know he has my back,
I know he’s looking out for me

my Cleveland, I don’t mind him
being a blue collar, few dollar man 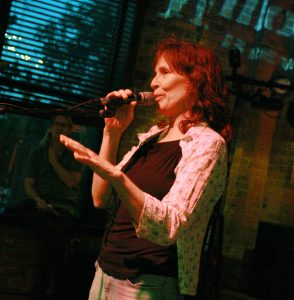 What I love about your city,
I tell him, is the blue sky
I don’t know how you walk under it everyday
without simply floating away
It must be how muscular you all are
like you’re made out of marble or something

That’s how you can tell
where the clouds end and we begin
I like the palm trees on your streets, I say
and the little parks along the way

Speaking of gourmet, you guys must work your butts off
to afford the rent here

Meanwhile, just think, if you grew up in Cleveland
you could be freeloading off your folks right now
and starting a garage band
And the traffic jams here
suck up way too much free time

We don’t really have traffic jams
in Cleveland—not enough people
Most of them took off for Paradise
But me, I’m going back to Cleveland
’Cause after a while, the nice days here
don’t really feel so nice

It’s like my mama used to say:
“Every good thing needs one good flaw”
—you know, a cloud, ants in the picnic basket, a feeling
that maybe all this sunshine won’t last forever

Which reminds me, I think your city
has the most fantastic basketball stars
Everyone acts like a winner, and you all wear sunglasses 24/7
which, after a while, starts to me feel a little seasick
like I’m walking around in a fun house of mirrors
And when you get right down to it,
I’d rather look through my own naked eyes
at these spectacular views of yours

I have a view, too—
it’s from a splintery old picnic table
on a cliff at Edgewater Park
Look to the right
and you’ve got the downtown skyline
When the sun sets in Terminal Tower’s windows
you could think Cleveland was Oz on fire
And then, straight ahead,
spread out below you, the Great Lake Erie
You can see the curve of the earth from up there
You can sit all day long with the entire world at your feet
Though the sky above you, more often than not,
will be gray—not blue—I grant you that
Third Place – Martin Snyder 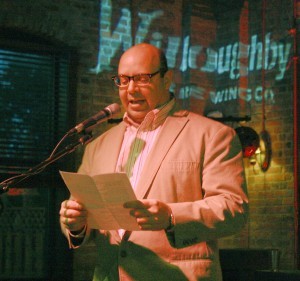 East and West sides
Not Eastern, like Pittsburgh Not Western, like Kansas City
Between New York and Chicago
Some of each, and all

Forty one degrees latitude, that of Rome
Hills and iron and looming steel works
Bridges, walls, deadmen’s curves of unyielding concrete
Ancient stone and coin and fabric on the Circle
Faded glory

A city of high standards
And low expectations
Golden, moderate, average
Nature loving the leafy, hilly, marine microclimate
A land of beauty and gravity and wind

Some rich, many desperate
White, black, brown, hillbilly and metrosexual
People and things from all places
A city not rising
A city not falling

City of everything, and city of nothing
City of greats, an unstoppable Tribe in ’95, a late Continental Airline
City of cheats, a petty fat Jimmy eating the town
City of healing, a hope to sick hopeful around the world

City of endowment, and debt, and art
A wild, dangerous place
Sleepy and conservative, a backwater that gets big acts
Stopped by the breaks, the decisions made or unmade
A hard city of hardy people and cloudy days

Cleve and land, an odd word
Cleveland, my spot for the show
Of the cosmos
On the fifty, behind the plate, center of the center section
Better seats than many might dream
Primordial knowing of home in the Forest City